A portion of Central Park was kept more natural than the rest, and it is called the Ramble. Its paths are twisted and confusing, a nice place to wander around and get lost. You can even imagine you are in a forest somewhere instead of in the middle of Manhattan. And apparently the Ramble is a historic place for homosexual meetings. Here is a quote from Wikipedia:

Since at least the early 20th century, the seclusion of the Ramble has been used for private homosexual encounters. In the 1920s, the lawn at the north end was referred to as the “fruited plain” and in the 1950s and 1960s the Ramble was feared by many as a haven for “anti-social persons.” In the early 1960s, under Mayor Robert F. Wagner, Jr., the parks department proposed building a senior center in the ramble with the hope of curbing gay encounters and anti-gay assaults. Today, the Ramble’s strong reputation for cruising for sex has given way somewhat to nature walks and environmentalism. However, some in the gay community still consider the Ramble to be “ground zero for outdoor gay sex”, enjoying the “retro feel” of sneaking off into the woods. A tradition much older than Christopher Street and FireIsland, the Ramble continues to be a gay icon even in the more open environment of modern New York.

And here are some pictures of the Ramble. Sorry, no shots of sex in the outdoors.

A rustic gazebo to relax in. 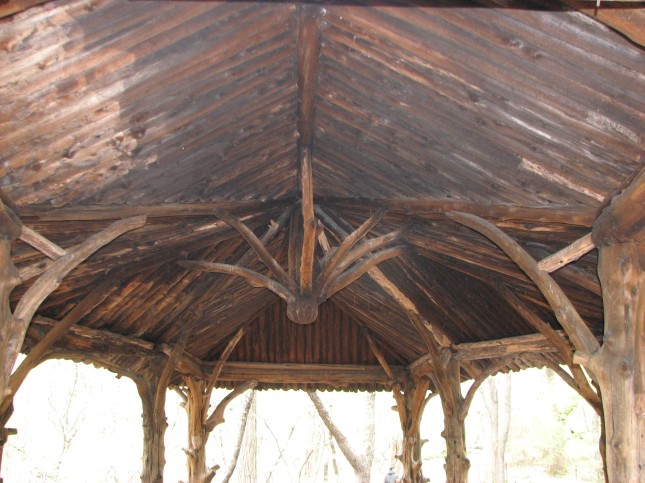 The ceiling of the rustic gazebo.

A squirrel digging around in a muddy area.

Look at the mud on his nose and hands! So cute!!

A different squirrel in the same area.

Posted by harlsmits on May 4, 2011 in adventure, nature, travel

One response to “CENTRAL PARK RAMBLE”