WHAT THE HELL WERE THEY THINKING? #3

Watch out, this is the depressing edition. This will not be funny. I am angry and sad.

So some of you may know that my dad died last February after a battling Parkinson disease and other issues. And I may have ranted somewhere that life is NOT FAIR, and bad things happen to good people. Well, it happened again.

My parents are very good friends with a family, the father of which was one of my dad’s doctors for a very long time until he (the doctor) retired. My parents stayed friends with them. The doctor and his adult daughter were at our house after my dad died. They have always been supportive. Well, the doctor has been battling cancer for a couple of years but was winning. Although in his 80’s, he still had years left in him, and he was very up beat and active.

Last week he had some type of body scan that shows tumors. He had a tumor. So he went into surgery and they removed it and ran all sorts of tests and it was benign. And he came though the surgery fine and was doing well. Then later the his daughter noticed he wasn’t looking good so called the Infection Disease specialists and a doctor came and prescribed antibiotics because nobody had given him any yet. And nobody gave him any antibiotics for nearly 24 hours after the doctor prescribed them!

His daughter and wife left the room for a little bit, either to go to the cafeteria or to go home for a bit, my mom had forgotten which, and when they came back he had tubes going in and out and was in a stupor. He died and they didn’t have a chance to say goodbye. .

The fucking hospital killed him because of carelessness and mismanagement. One doctor said he could have lived at least another few years if he hadn’t come in for the surgery that resulted in an infection because he wasn’t given antibiotics soon enough. So a man who spent the majority of his life helping other people get better died in a hospital for NO FUCKING REASON. There are just no words to express how infuriating this is. I hope his family sues, not for money because they don’t need it, but to stop things like this from happening again.

The hospital was Cedars-Sinai in Beverly Hills. My mom also knows two other people who came out much worse than when they went in to that hospital, so don’t ever go there.

Posted by harlsmits on September 9, 2010 in complaints, dad, family

Tags: complaints, scary, sick, stupid, what the hell were they thinking

Yes, it’s actually raining a bit. A heavy drizzle. I love the rain. The deer don’t seem to mind it too much. It almost makes up for the fact that I”M STILL SICK. Blech. I went home early yesterday and slept and ate udon soup and popsicles and slept and watched Netflix on demand and slept some more and felt crappy. I was going to call in sick again today but my stupid internet wouldn’t work (hence an upcoming post, SCREW AT&T!!!). And I got so frustrated I just said screw it, I’ll go to work, shut the door, and sleep in my office.

Here is a picture of Squeaky sleeping in a pile of crap in my bedroom. It’s her new favorite place to sleep. So now I can’t clean my room, can I? 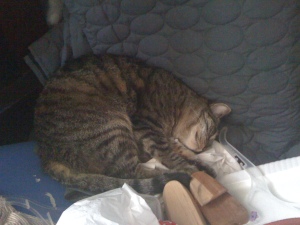 Posted by harlsmits on September 8, 2010 in cats, complaints

Hubby got me sick, damnit. My Monday off was spent sleeping half the day cuz I felt like crap. And it’s worse this morning but I still went to work. I have my own office so I feel I can adequately isolate myself from others. I’m hoping to take a nap during my lunch break. And you know what else sucks? I have a tiny pimple under my nose, just above my lip, dead center. Yesterday and today I tried steaming it away but it didn’t work well.

I had a fun weekend up to when I got sick, so I’ll post about them later. I don’t know how people manage to post on the weekend. I tend to stay as far away from my laptop as possible. So this weekend’s updates will include:

Posted by harlsmits on September 7, 2010 in complaints, me