LET THE RIGHT ONE IN

This movie was awesome. I loved it. A vampire movie that is more about the relationships between people than about a blood bath. A 12 year old boy, who is bullied at school, befriends a girl that moved into the apartment next to him. As their relationship progresses, and he finally learns that she is a vampire, he kind of provokes her a bit to see what her limits are, but aside from that accepts her for who she is. 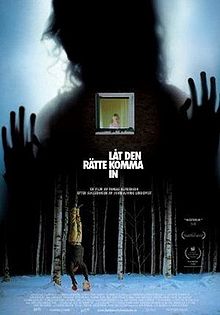 I watched the 2008 Swedish (original) version directed by Tomas Alfredson, which is based on the novel of the same name by John Ajvide Lindqvist. I now have to buy the book. I don’t normally like movies based on books, but this one was good. I probably would have enjoyed it even if I had read the book first.

I read the book synopsis on Wikipedia and learned that there is a lot more backstory in the book than in the movie. For instance, the vampire asks the boy if he would like her even if she wasn’t a girl. I assumed she meant that she was a vampire, not a true girl anymore that could grow up. But apparently in the book the vampire is actually a boy that was castrated before being turned into a vampire. They also don’t delve deeply into the relationships between any of the adults and the children, which seems to be more important in the book. So now I must buy it!